After a journey of about 2 hours and 30 minutes you will arrive at Cassino, were you will enjoy a guided tour of the famous “Abbazia” monastery. Founded in 529 by St. Benedict of Norcia on the site of an ancient tower and a temple dedicated to Apollo, situated 519 meters above sea level, during its history it suffered an alternate story of destruction, looting, earthquakes and the consequent reconstruction. In 584, during the invasion of the Lombards, the monastery was destroyed for the first time and the community of monks, with the remains of the holy founder, had to take shelter in Rome. Then, from 643 the monks found accommodation in the community of St. Colombano in Bobbio and later in various monasteries and colombaniane abbeys in Italy and Europe, increasing greatly the Benedictine communities. Rebuilt in 717 under the impulse of Petronace of Montecassino, the Abbey was destroyed a second time by the Saracens in 883, being rebuilt in 949 by Pope Agapito II. Throughout the Middle Ages, the abbey was a lively centre of culture due to its abbots, libraries, archives, schools writer and miniaturist, who transcribed and conserved many antique works. Historical evidence of high interest have been collected and passed on to Montecassino: from the first precious documents in the manuscripts of the famous Monte Cassino, the precious and rare incunabula. During the Second World War the Abbey was almost completely destroyed and later rebuilt in the same splendour.

British World War II military cemetery
The cemetery has 4255 graves, the great contribution of the British Commonwealth countries during the Great War. It was opened in 1956, its elegant architecture, ornate and refined taste. The care that is given to the clear waters of the glaze and the green gardens gives a sense of living presence to the souls of the soldiers buried.

Method of payment
Payment can be made by credit card.

Additional Notes
In order to visit the Abbey in Cassino you must be suitably dressed, in particular you need to cover shoulders, legs and generous head covering. 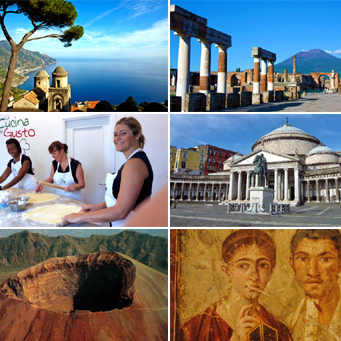